Mustajeer landed the first £1million Sky Bet Ebor Handicap at York and now will have his sights set on the £4.5million Melbourne Cup on November.

The 16-1 shot, ridden by Colin Keane and trained by Ger Lyons, became the fifth Irish-trained winner of the richest Flat handicap run in the northern hemisphere in the last 11 years with a three-quarter length win from 25-1 chance Red Galileo.

Another 25-1 hope Desert Skyline was a further half-length back in third. 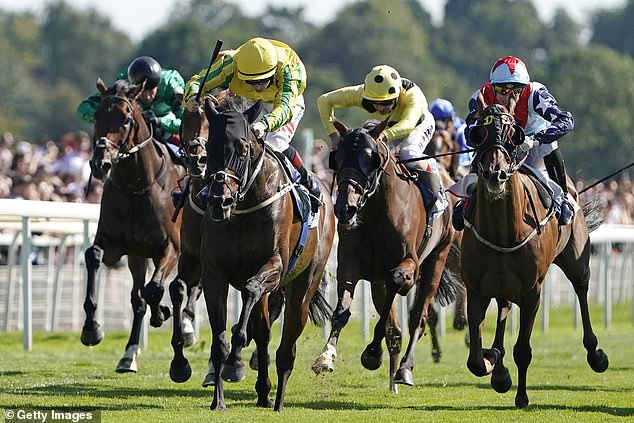 Mustajeer won the Ebor at 16-1, beating Red Galileo (25-1) by three-quarters of a length

They will now transferred him Down Under to be trained by Kris Lees for the Melbourne Cup on November via a crack at the Caulfield Cup.

The Ebor had been a target for Mustajeer ever since he finished fourth in the 2018 edition. 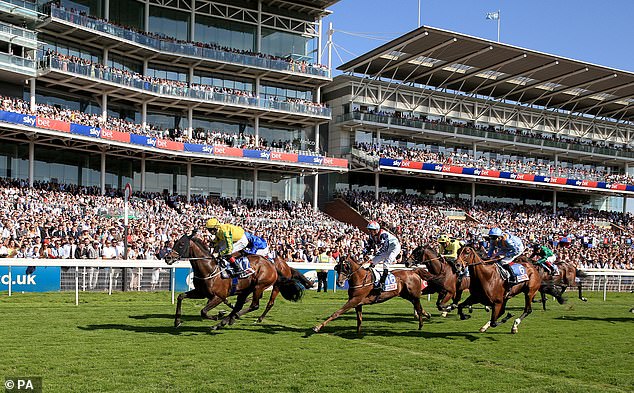 Spratt said: ‘He was a little bit under the radar, maybe because he is a six-year-old and not as sexy as some of the other runners.

‘But we have always known he is a proper horse. We told the Australians and I hope that gave them a bit of confidence to buy into him.

‘He hadn’t stepped up to staying trips until last year’s Ebor. Gary Carroll rode him that day to get the trip but got off him and said this is a proper horse for staying trips.’

A horror fall at Chelmsford on Friday left champion jockey Silvestre de Souse with a broken collarbone and fractures in his back.

He could be out for up to six weeks and one of the first rides he missed was the winning one on Oh So Bright in the Sky Bet City of York Stakes. James Doyle stepped in for the ride.

It was the Andrew Balding-trained colt’s first run since finishing a hugely creditable fourth to Magna Grecia in the 2,000 Guineas.

On what could be her last run in Britain, Laurens, who was trying to give the winner 7lb, finished second beaten a nose.

Jockey Rossa Ryan celebrated the biggest winner of his career witjh a three-quarter length win in the Celebration Mile at Goodwood on Paul Cole-trained Duke Of Hazzard. It was a third consecutive win for Duke Of Hazzard who previously won the Thoroughbred Stakes at Glorious Goodwood.